I'm Philip, a hobby indie game dev (@PhilipDrobar), and this is my story of how I got started with Unity, created my first game in roughly 6 months, and how the world-wide pandemic influenced me and my design.

I had many failed starts in Unity and other game dev tools over the years, but I gave it another shot in January 2020. Initially, I didn't plan to make a specific game, but I just wanted to create a first-person controller and a 3D environment to interact with, learning as I went.

I happened to return (just in time) from a trip at the end of March and had to self isolate. At the same time, all these notices appeared around my apartment complex, informing residents of what's going on in the close vicinity. Being confined in a very limited area while also getting information from scattered documents gave me a strong Resdient Evil vibe. The idea for Chestnut Grove was born.

I knew the experience of the pandemic was different for everyone, depending on your location, surroundings, and life circumstances. From the first concept I knew this game would be personal, but I also wanted it to be relatable. Not asking for pity or exaggerating the "Woah pandemic is bad guys!" messaging.

After I started to include some of the real notices found close to my home, I soon realized that this was what I wanted the whole game to be: I wanted the game itself to be a document on how this phase of the pandemic felt, in a grounded, more or less realistic way, not overly dramatized, but also not too gamified.

A note on inclusivity

Relatively early in development, I made a decision on how I'd approach Inclusivity within Chestnut Grove. I know it is a small game and when you play it, you probably don't notice it, but if I wouldn't have taken that step, I can promise you: Chestnut Grove would have looked differently.

While showing a personal experience, I wanted the game to feel as relatable as possible. I'm a cis white male, but I acknowledge that not everyone playing my game might be, so I tried to avoid anything that just assumes these perspectives as much as possible. I'm not sure if I succeeded entirely, but putting in that effort was important to me.

In all character-based writing, I tried to avoid gendered pronouns or pronouns in general, I used gender-neutral names.

I added but later removed some character models, as they represented a more masculine or feminine character look and weren't actually important to the core game experience. Chestnut Grove is a very small game, but even in a small game, there were opportunities to make the game feel more inclusive. And to be honest: Designing it that way wasn't that hard, it was mostly a matter of being aware, saying to myself "Hey, maybe the player wouldn't feel like he's playing as a guy. Maybe they wouldn't have a husband or a wife. Maybe they identify themselves differently." This was the simple approach that guided me.

Very soon after having the first few presentable areas of the game, I created some screenshots and GIFs. This wasn't just to market the game (I wasn't even sure it was something I wanted to "market" yet), but helped me to see the game without "developer glasses". If I'd stumble upon a Chestnut Grove screenshot online somewhere, would it pique my interest? Does this convey the look and mood I'm going for?

While I was locked into my art style, but the lighting, post-processing, and camera angle are big factors on what your media conveys to the audience.

Announcing the game and having a closed beta

Pst! This was probably the "cheapest trick" in my marketing!

Around mid-April 2020, I created a website for my game and included a newsletter sign-up that would get you access to a beta version of Chestnut Grove if you'd sign up by a certain date. I also tweeted this out with a couple of hashtags.

I didn't (and still don't) have a significant Twitter following, so I think the hashtags did most of the work along with people wanting to get early access to an unfinished game - for free. This also got Chestnut Grove the first media coverage: Alpha Beta Gamer was so nice and featured the announcement of Chestnut Grove on their website.

This helped to get around 50 signups to my newsletter and beta (after removing lots of spambots). 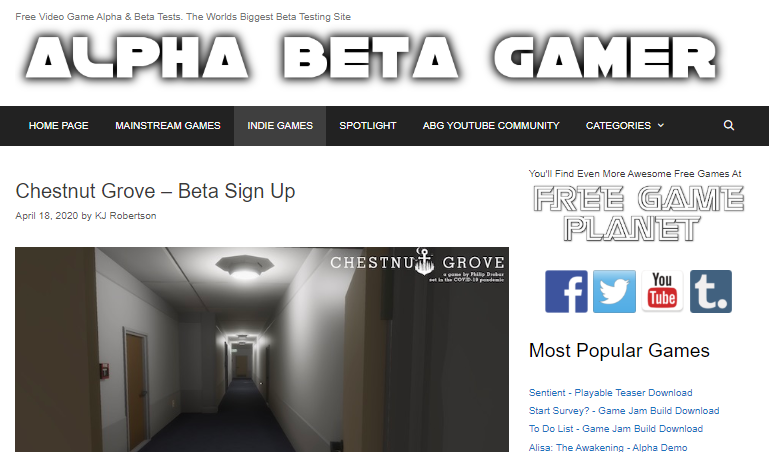 You can read it here: https://www.alphabetagamer.com/chestnut-grove-beta-sign-up/

So, the positive takeaway on this was: I got quite a few newsletter signups, Twitter followers, and even a bit of media coverage from this (which helped increase reach).

It also lead to first gameplay videos. (Some very polite streamers asked me before if they can post a public video actually, really appreciated that). An example of that is this video: https://www.youtube.com/watch?v=WrUF8f8wPeg

The downside was that even though it was a beta, I got almost no feedback whatsoever (which I didn't hugely expect, but still). If you're making a small game in this scope and are looking for productive feedback on your game, I found it more valuable to send the game directly to some trusted friends and ask them directly.

Up until that point, I only had some screens and GIFs of the game.
On June 13th, 2020, I finally posted the trailer on Twitter and Youtube

For me the most useful aspect of having the trailer is being able to post it on some of the Twitter threads that go around every week or so, making sure your game is part of the "indie gang", though you usually only reach the same group of people with that.

I also posted the game announcement and trailer on my LinkedIn and actually got pretty decent engagement out of it. Mind you that my LinkedIn network is completely different than my Twitter network, helping me get quite a bit more reach with almost no extra effort.

Reaching out to other media: Print/podcast

After seeing it floating around on Twitter, I reached out to the Editor of PixelBison magazine. Some Twitter DMs and Emails later, I sent them the beta, they were kind enough to do a preview in their #2 issue of July 2020.

While the magazine probably had a small reach, it was truly special to have a written and printed preview of my little game, something that not a lot of Indie's have. 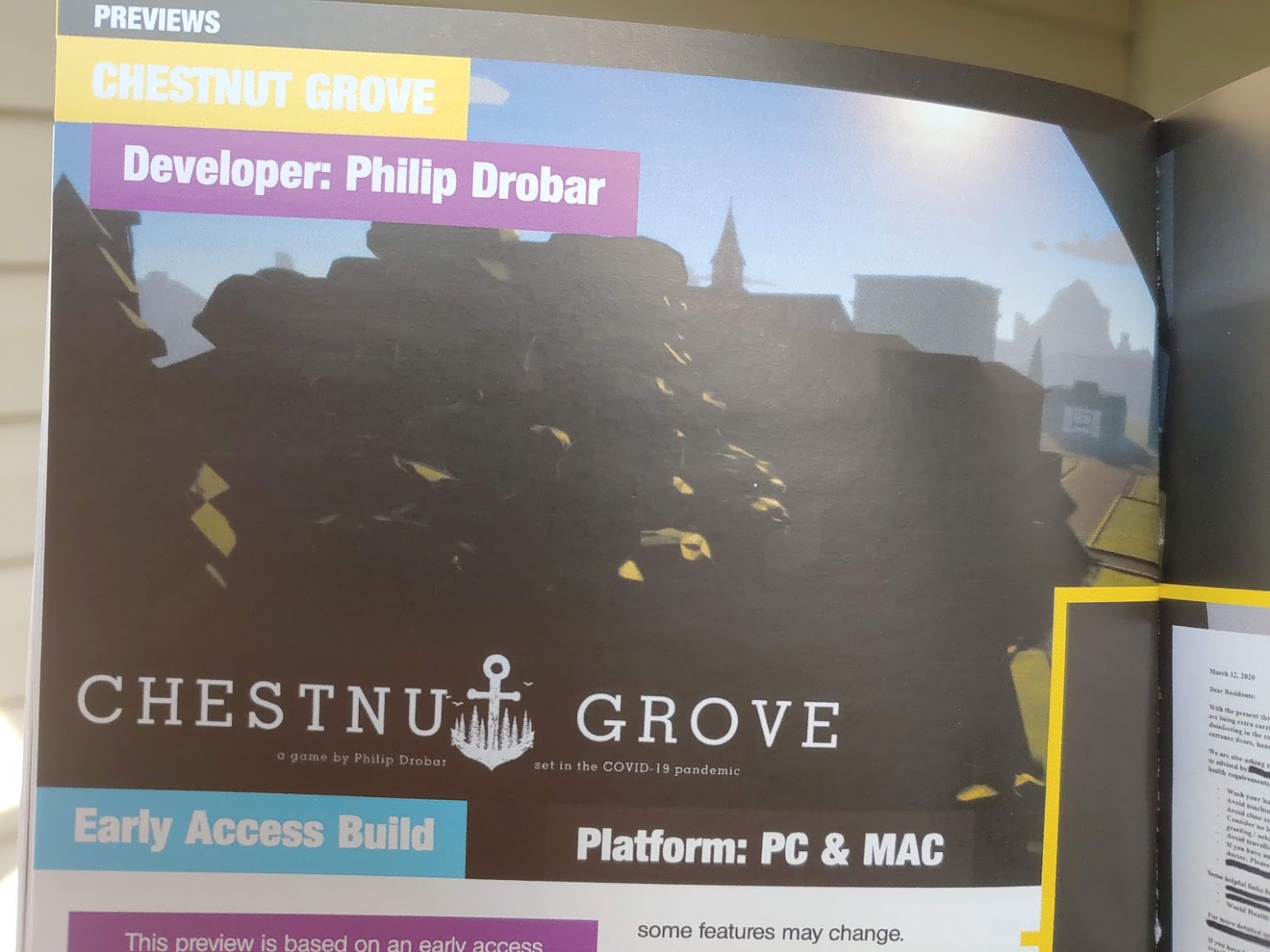 Pretty much around the same time, the IndiePod podcast did their regular call for Indie developer interviews. I messaged them and recorded my interview with them about Chestnut Grove, and how it was like to make a game about the corona virus crisis while actually being in the middle of it.

You can listen to it here: https://open.spotify.com/episode/4F5ncv3uvXemsZ778uS0kU?si=cMv1AZIzSOKmfs1PlTqH2g

A small note to keep in mind was the delay between the time of recording and the actual air date of the interview. I was still in beta during the interview but by the time the episode was released, Chestnut Grove v1.0 was already out.

On August 31st I officially released v1.0 of Chestnut Grove, meaning there would be no additional content updates, only bugfixes.

The game had a whole extra area that was not included in the Beta, giving testers an incentive to get the game and replay it.

I contemplated the pricing till my head hurt. Chestnut Grove is a short game, if you'd just run through it, you'd have no problem finishing it in 10-15 minutes. Being more of a walking sim than a mechanics driven game, I knew that people would probably also be turned off by a big price tag. In addition, I felt that people might think I'd be exploiting the coronavirus pandemic for my own financial gain.

In the end, I decided to set the price as a pay-what-you-want with a recommendation of 3,- USD. I can't provide further analysis or expertise except that I think that game pricing, in general, is anarchy and a lawless wasteland.

A nice thing that happened was that users who chose to pay for the game actually paid more than the recommendation, some even over twice as much. But I'm thankful for everyone who downloaded and played Chestnut Grove, even if they did so for free.

I continued to do a couple of QoL updates on Chestnut Grove, bringing the current version of the game up to v1.3.

Most of these are minor bug-fixes, localization fixes, and the saddest part: Updating the latest numbers of total COVID-19 cases and deaths. I knew that adding a statistic to the game of an event that is still ongoing meant I'd have to update or be outdated, but it was important to me to at least include these two numbers.

On social media, I still posted about the game here and there. The last/most recent marketing activity was in November 2020. I reached out and joined podcaster and streamer Indiegamiacs on his Virtual Indie Booth, showcasing 15 minutes of the game. You can still watch it here: https://www.youtube.com/watch?v=QkCszPgOXD

I'm happy with the game I made and how it performed overall. That's what mattered most to me.

I didn't set out or expected to be a breakout indie hit, neither did I made myself financially dependant on it. Keeping my expectations in check helped me stay sane and enabled me to just focusing on learning from the whole process.

For example, looking solely at the metrics, it probably didn't pay off to translate the game to German and Spanish, but I'm glad that I did as it was a great learning experience and if even one person was able to play the game due to the offered languages, I'm happy.

I'm also incredibly thankful to all the people who helped me make Chestnut Grove, especially Sofía, Sina, and Stephan.

And a big thanks to everyone who played it: If you did, it would mean the world to me to send me a tweet, message, or email. How did it make you feel?

You can get Chestnut Grove here: https://philip-drobar.itch.io/chestnut-grove