The last game I shipped was Spinnortality, a cyberpunk management sim where you try to take over the world. The thing you stared at most was a globe, which changed colour as you took over more countries.

The game I'm currently working on is Silicon Dreams, a cyberpunk conversation sim where you learn about people. The thing you stare at most is a TV screen with a person on it.

That's a bit of a shift. Let's talk about that. 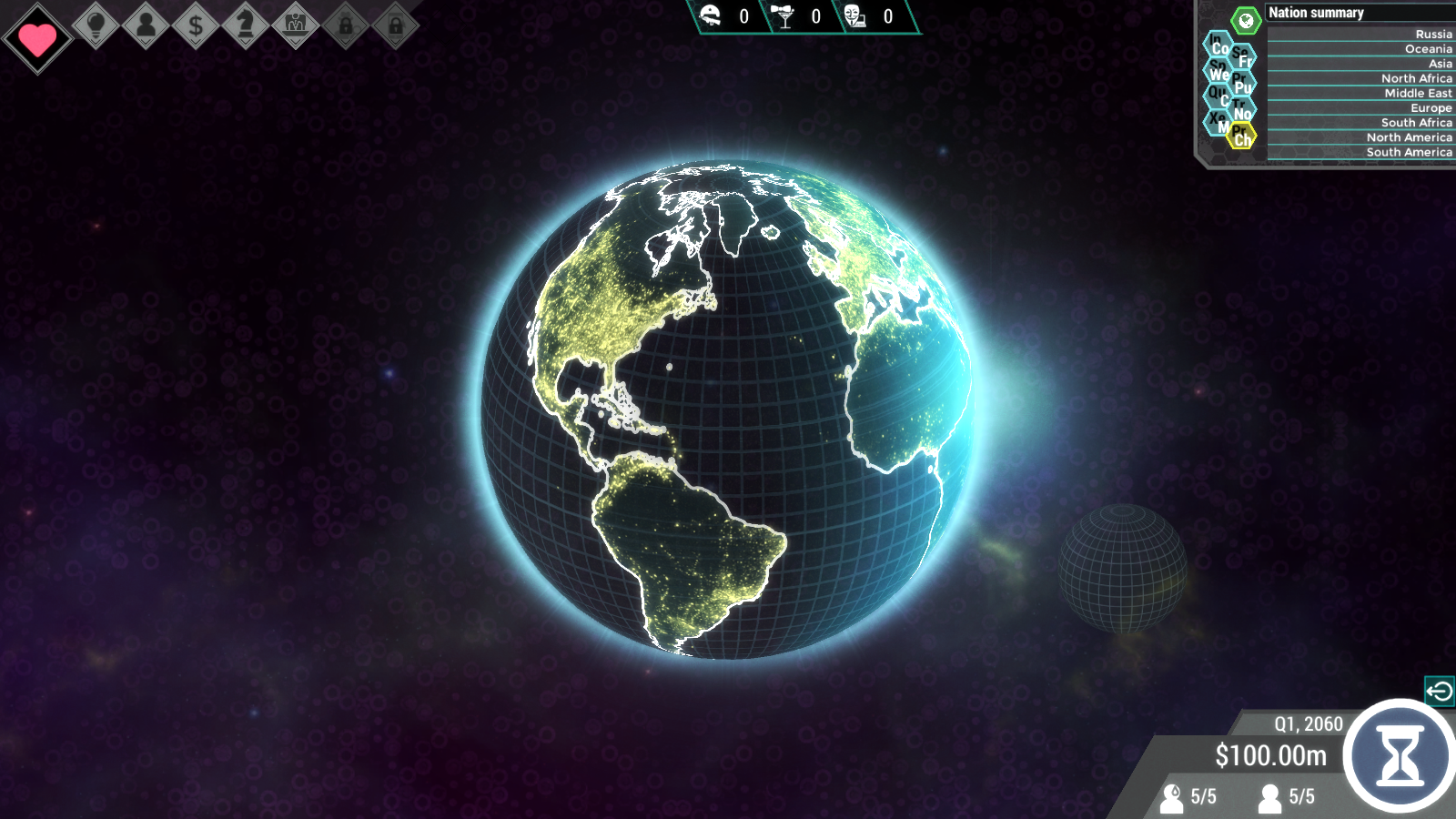 So vulnerable... so defenceless. So profitable.

Telescopic: the world as a vulnerable marble

When I was designing Spinnortality, I was interested in exploring a cyberpunk dystopian world similar to our own. I wanted to take real-life political or business scandals, or examples of corporate overreach, and craft mechanics around them. It would become a sort of sci-fi mirror of our own reality. For more on that, see this post I wrote about why cyberpunk is perfect for this kind of commentary. When I first started the game, I thought the tech tree's entire first row was fictional, bar social media. By the time it shipped, they were all real. *shudders*

Why not just make a silly cyberpunk game without trying to take stuff from real life? It... didn't seem appropriate. Cyberpunk came about as a commentary on late capitalism and libertarianism, for starters, so it felt weird for me to just use the subgenre without acknowledging that. Also, there are real people right now doing the kind of things players can do in Spinnortality, and the impacts of those decisions are in many cases catastrophic. It would have been an omission to not address the realities which informed the fiction.

Can you see humanity through a telescope?

This raised a few issues, though. Firstly, the world a Spinnortality player engages with is very remote from the people of that world who suffer the consequences of your choices. You play a corporate bigwig in an ivory tower somewhere; you never leave your desk to walk down the street and see, for example, an increase in homelessness. The game is mostly a globe and some numbers. In early versions, in fact, it didn't feel at all like you were conquering a world - just making figures go up. 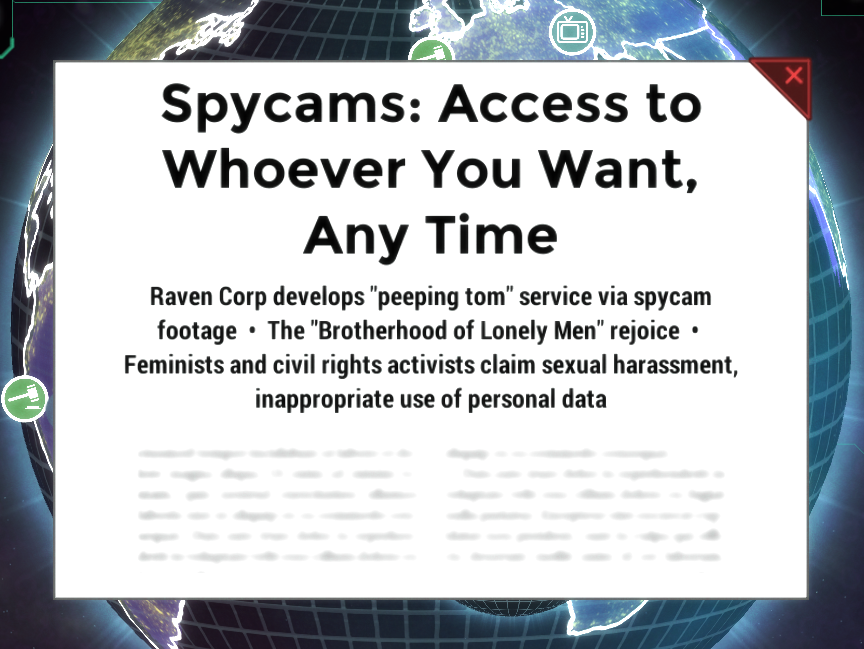 "The brotherhood of lonely men" is inspired by Incels. They are never mentioned again. This is a good thing.

My solution to this problem was to add news articles: when the player does something noteworthy (or something big happens, like a global crisis) a news article pops up describing the event. This went a long way towards making the world feel like a place where player actions were actually having an effect.

Secondly, although it now felt more like players were affecting the world, that didn't mean they were affecting people. When a news article says "PlayerCorp has forced Oceania to deregulate its genetic experimentation market", they don't get a peek into the struggles the average Oceanian citizen will now have regarding, say, risky healthcare procedures or newly released, dangerous products.

My solution? Well, the player already receives emails each turn. These are mostly just decision events: "Give money to charity to improve PR, or invest it in research?" wrapped up in a corporate framing device. But I realised I could also use it to show the player the impact of their decisions on individuals. 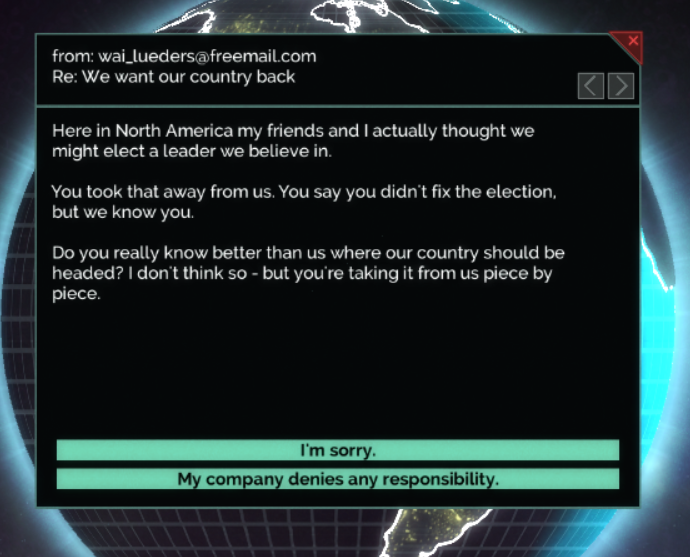 Some of these are one-offs: messages from a person you'll never hear from again, but who's been impacted by your actions. Some are from characters you're introduced to and build up a bit of a rapport with, who might then criticise you or congratulate you based on your choices later on. Some of them even lead to unique endings.

By bringing the experience of these people into a core part of the gameplay loop - a part you can't skip, by the way, since all decisions must be concluded by the end of the turn - I hoped to confront the player with the real-world consequences that might follow their in-game decisions, and encourage them to reflect on real-world politics and business a bit. Not to punish or berate them, but to make them aware of the context of their actions. 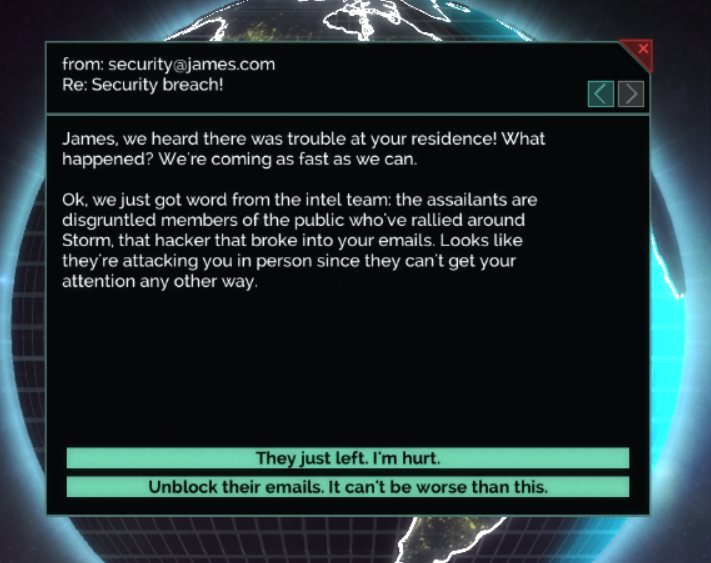 Incidentally, you can avoid receiving those emails but then you get attacked instead. Power to the people!

This was interesting and definitely made the game richer, but it was always a struggle. Ultimately, I was trying to make players feel bad about playing the game the way it was meant to be played - and while I tried to avoid heavy-handedness I knew there were other games that could present players with the human cost of late capitalism.

So for Silicon Dreams I wanted to dig down into the experience of getting to know just one person at a time. What would it be like to be at the bottom of the heap?

Microscopic: each person, a world 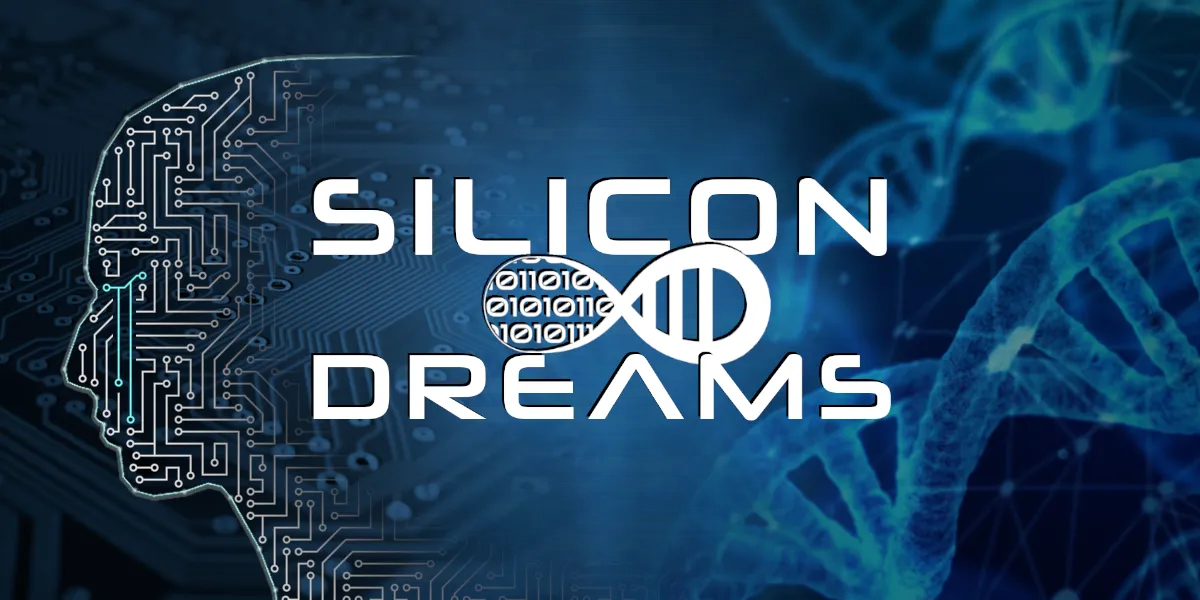 Silicon Dreams is, of course, very different to Spinnortality. You're also at a workstation, but the "system" you're prodding isn't an entire globe, it's one person. It's your task to get to know this individual, understand their emotional landscape, and navigate it for your own ends.

A key to this is the emotion-measuring machine: players are given a kind of elaborate lie detector which displays whatever feelings their subject is experiencing at any moment. This means the game isn't just about asking questions until you uncover the information you want. Instead, each line of dialogue causes an emotional response in the subject. Even tone has an impact: "You're broken" results in an entirely different response to "I worry you're broken. Is there anything I can do?"

Because each dialogue line has an emotional impact, and because you'll need to extract factual information from the spoken dialogue and analyse/manipulate the subject's emotions, it's not really possible to complete the game without being exposed to the details and struggles of each subject's life. By tying the subject's emotions to both their dialog and the information you need to complete the report, we're hoping to bring the subtler, less quantifiable aspects of their lives into focus.

Some questions are also locked behind emotions. Maybe your subject won't talk about their tragic past if they're currently happy, because they don't want to make themselves sad. Maybe they won't let key information slip unless they're scared or angry. Understanding your subject's feelings towards different parts of their life isn't just a fun bit of subtext and glossing: it's a key resource-management feature.

On a side note, this isn't totally unlike the gambling mechanic in Inkle's Sorcery series, which I've always found interesting. The game of "swindlestones" in that series is a game of betting and trying to mislead your opponent, and if you win you usually earn some gold. But while you gamble, you and your opponent pass the time by chatting. Eventually your opponent will say something really intriguing, but the only way for you to keep talking about it is to keep the game going - perhaps to the point where you know you'll lose this round. 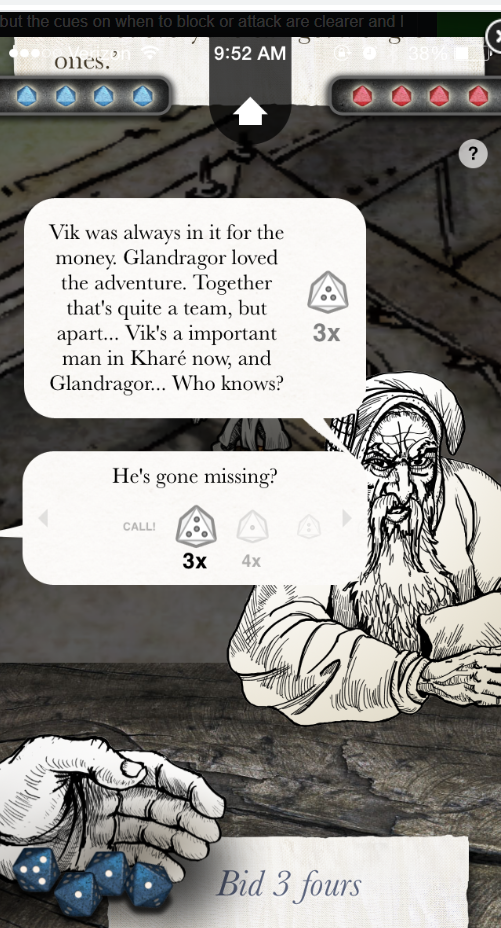 So do you deliberately lose to learn useful information, or ignore those tantalising tidbits so you can win money? I think this was the first time I saw a game with fairly clear "win" conditions (like Silicon Dreams' emotional locks and report-sensitive information) with a narrative layer overlaid onto it (like Silicon Dreams' dialogue and character narrative) where both layers affected each other and were often equally important.

It's the interaction between these two layers which I think is the critical component of Silicon Dreams. The player is certainly not all-powerful, but in relation to their subject they hold all the cards. Considering this dynamic, the game then asks the player: "Do you want to please the company, or help these androids?" This means the player must choose whether to engage with the subject on an emotional level, or operate at maximum efficiency by manipulating emotions to directly answer the questions on the report. Without the tension between this mechanical win condition and the narrative layer of subjects' lives, this choice would have no weight and would resemble the earlier stages of Spinnortality: viewing the globe as a series of numbers to be manipulated for profit; viewing subjects as a series of emotions to be manipulated for information, with no concern for the stories behind those emotions.

Everyone should get their day in court

I also like how Silicon Dreams makes you study just one person, and displays them in front of you as if to say "Whatever you may think of them, this one single person deserves your attention". Spinnortality did the best it could by presenting you with an email. There, the logic was: if each email is an important, mandatory decision then the fact this email was sent by a single struggling individual means that their struggle is also noteworthy; attention must be paid to it for as long as this window is open. 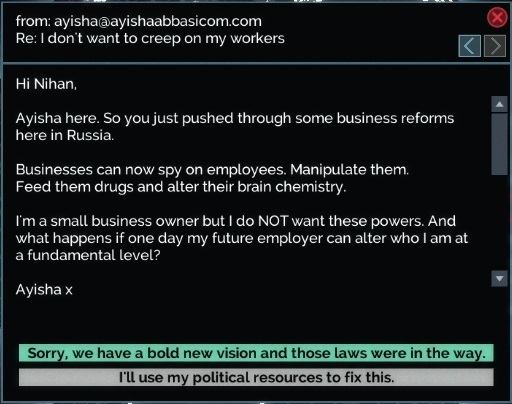 An email from a character you can get to know over the course of the game. I think of her as the game's "angry conscience".

Will every character in Silicon Dreams be an entirely sympathetic person just doing their best, with no flaws or blemishes? I don't think so. But, in the same way that every defendant should have the right to a fair trial, no matter the crime, I think every subject in Silicon Dreams should be given the attention a human life deserves. Kronos Robotics thinks of its androids as disposable entities, robbing them of all recognition and validation. Even if we encounter some irredeemable characters, I think they still deserve our focus while they're in the interrogation chair.

Do I think Silicon Dreams' perspective is "better" than Spinnortality's? No - it's vital to understand how the impenetrable systems that currently govern our world got there, and how they continue to operate. In my opinion every human being should understand how they got to where they are: which parts of that process were their own choice, and which were systems beyond their control - but in most cases still decided by someone, somewhere. 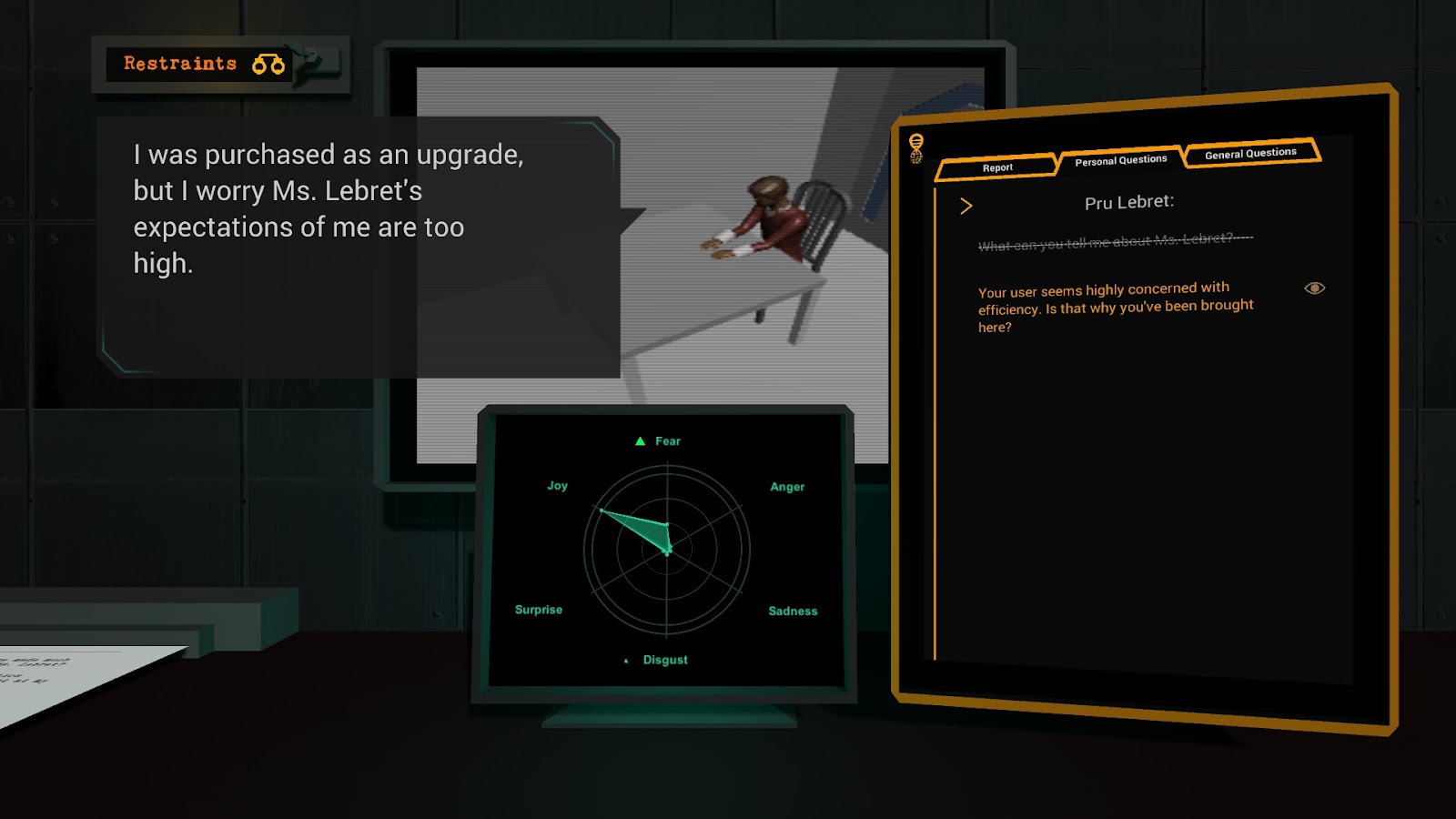 But just as important is the opposite perspective: that, once we understand the forces that shape our world, we try to understand other people who have been shaped by those forces as well. I hope Silicon Dreams can do that. 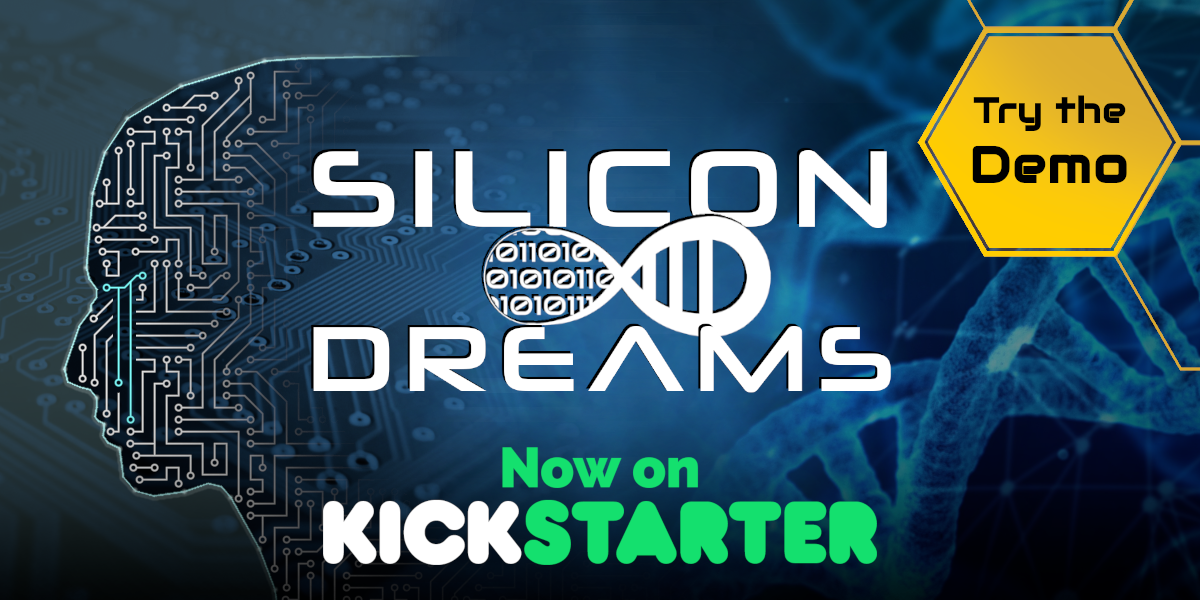 If you weren't already aware, Silicon Dreams is on Kickstarter by the way! Please go back it if you can: we think this game deserves the time and attention necessary for us to think through and design solutions to these ideas.

And if you enjoyed this post, why not sign up to our newsletter? Next time we write a post we'll lovingly deliver those hand-baked word-breads, still warm, directly to your inboxes.